Carsten was already faster and blogged about day 3@CeBIT - so it's time to talk about the first two days :)
The first two days we had a rather small booth compared to other projects in the LinuxPark (Hall 5): Placed in the corner next to the Debian booth (see photo). However, we managed to attract many interested eyes, and that's after all what's important (see photo).
The CeBIT is very much a business event: many people are wearing suits which is not really surprising as the audience is of course different to for example the LinuxTag. As such they have another background: Sometimes they never even saw KDE. That's good as we could show step by step the power of KDE: the desktop itself (kicker, K-button, desktop), applications like KMail users usually need or Amarok with iPod support.
Sometimes the questions were more detailed, amongst others -- of course -- What will KDE4 look like? This one is very important and we tried to promote the difference between KDE4 and KDE4.0, the very first KDE4 release. In short, KDE4.0 is the first release in the whole KDE4 lifetime. As such will ship new technologies and cleaned up APIs. Many work went into the core of KDE which is not even visible to the user. When KDE4.0 is released applications will first have to use it. It does not make *plop* and we have a full blown KDE4 which can be compared to the thousands of applications available for KDE3.5. Even the KDE4 components itself (like plasma) probably will not contain all the features and be perfect right from the start.
This is even good to some degree: It is perfectly fine if plasma is basically the same as what we know from the KDE3.5 workspace - it's a well and long tested behaviour after all. I think we did a good job with regard to issues like this and the interested parties understood that. We demonstrated KDE4 versions of Kate, Dolphin, KRunner and KSysGuard including the new Oxygen icon theme and the general feedback was positive :)
Besides that, we gave lots of KDE-T-shirts, pins and bags for free (iff they made a small donation). I'm sure I forgot something, but it's a way too late now and I have to be at the decibel hackathon in some hours again *tired* :) 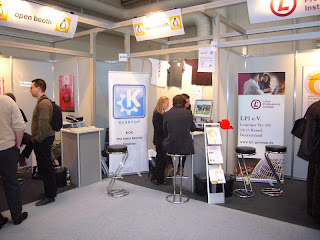 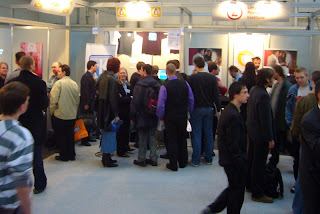