Right now, in Kate's gitorious repository we, or rather mainly Christoph, is rewriting the heart of Kate: The text buffer. In this blog I'll explain how the text buffer works in detail. After reading, you'll be able to understand the code. And be warned: Probably you will be desperately amazed about its awesomeness! So this is a must read :^) The following content is based on the notes for design ideas for the new text buffer.

Storage. Kate Part internally stores the content of a text document as a QVector of text lines. Each text line holds the text in a QString object as well as additional data like color attributes for highlighting. Inserting and removing text lines implies inserting or removing items in the QVector of the text lines. This is can get slow when there are thousands of text lines in a document, because QVector has to move the memory every time. Thus, to keep text operations fast, Kate splits all text lines into several text blocks: Each text block contains a certain amount of lines (e.g. 256). The expense of memory movement is then always limited. When a text block grows too much, it is automatically split. When the amount of lines in a text block shrinks, it is merged with the previous text block. In other words, Kate's text buffer automatically balances the text blocks. The basic idea of Kate's text buffer, the text blocks and text lines looks like this: 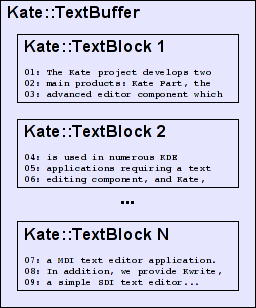 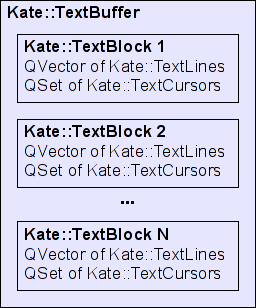 Editing Operations. When editing text, you usually have only four different types of text manipulation:

Those editing primitives are implemented in the Kate::TextBuffer and Kate::TextBlock and take care of balancing the text blocks. For each one the set of text cursors in a text block has to be adapted. Of course, corner cases need to be taken into account: For instance, unwrapping the first line in a text block means that cursors in the first line need to be moved to the previous text block. All editing primitives emit a signal, such that additional layers later can track what happens. For instance, the undo/redo system needs to know all editing operations. Or on top of that we could implement vim like swap file support, i.e., track all changes from the beginning, and if Kate crashes, replay all the editing primitives on the original files.

Transactions. A transaction consists of several of the four editing operations. For instance, if you select text and then move it to another location in the document with drag & drop you want this to be grouped together to a single text operation on undo/redo. (The text operations in this case are unwrap lines and remove text, then insert text and wrap line). To be able to specify which parts of text operations belong together, the text buffer provides two functions: startEditing() starts a transaction and finishEditing() closes it. Those functions use reference counting, so you can call startEditing() multiple times and only the last finishEditing() completes a transaction. Again, signals are emitted e.g. in finishEditing() such that other layers (undo/redo system) are notified about this.

Revisions. As an easy way to check whether a document changed you can get the current revision of the text buffer. The revision is simply an int64 starting with 0 after loading a document. The revision is incremented in every of the 4 editing primitives. This way you don't have to listen to multiple signals like textInserted() and textRemoved(). This could be useful for e.g. KDevelop's background parser: Parse a file. When done, check whether the revision is the same. If yes, parsing was successful. If not, parse again. This is how QtCreator does it. Easy and straight forward.

Unit Tests. The text buffer, text block, text line, text cursors are all designed such that unit tests can be written. Hence, each of the above implementation details will be covered by unit tests.

Is there some way to detect whether one transaction undoes the previous one? So for instance if you add a character the immediately delete it, that would add two revisions rather than staying at the current revision, right?

Now, what about very long lines? I'd guess those should be split into smaller objects too.

Two questions;
1) why not use a QTextDocument ?
2) did you consider the same backing store concept that QTextDocument uses? Which is one utf16 array of text with a list of chunks pointing the the places in the document making up the actual text-flow.
This means that if I move a word I never touch the text, I just change the chunks-datastructure.

1. QTextDocument's API doesn't fit what all other parts of the Kate component use, to wrap it into a compat API or to change all other parts would be kind of throwing all code away and rewritting it from scratch. We tried that once, years ago, but at that time QTextDocument had it's own issues and now I guess it is just to late to redo all that work.

2. Same here, the component wants a line based api, it wants to get lines as datastructures and pass them around. This is only feasible if the stuff is stored as lines, too, or by copying the data on line retrieval. I stick to line storage atm.

For the question about to break long lines down: Won't be done. They need to be layouted at once anyway, I don't consider text files with > 10k columns to be really the place to use a normal text editor, for html pages which remove the line break, we will give the possibility to just let kate part auto-wrap them hard.