Last year I've blogged about the missing system monitor with the three bars for the panel and about its port to Plasma. Meanwhile other developers also did a port called System Status. In a collaboration with them we finally have the applet back in KDE's subversion, the name is now "System Load Viewer" and it uses the data engine "systemmonitor" that already exists in KDE 4.2.
So if you want to have the plasmoid for your KDE4.2 desktop, it should be straightforward to compile/install.
On the screenshot you can see the plasmoid in action. There are two instances, one on the panel and one on the desktop. The one on the left is the KDE3 one. 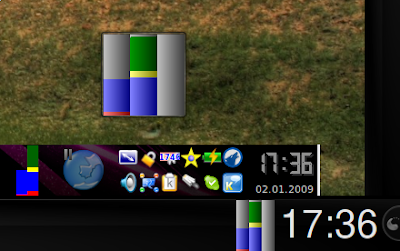 It's worth to mention that the plasmoid already supports more featues than the KDE3 version. Features include:
As soon as the KDE 4.2 freeze is over we'll have to see where we can put the plasmoid to make sure it's available for KDE 4.3 :)
Posted by dhaumann at 5:28 PM

I have to agree with pugacloff

Interesting: I really begin to wonder how many ports exist of this applet :)
I agree that it looks nice, maybe we can integrate the drawing code.

Still looking for a xosview clone or a way to put xosview itself into the panel.

@testerus: That's not what this applet is about.

I have just noticed that, if I put the plasmoid on the panel and lock widgets, then logoff kde and login again, the system monitor plasmoid looses the original width (i.e., after login its width is half of when it was added to the panel)

oh this is latest kde trunk and your applet

you can select 'xosview' using the 'emebedded window' plasmoid and this will give you an xosview plasmoid which you can move to the panel :)

@SlashDevDsp: Yes those sizing issues should be fixed, I'm pretty sure.

Could you please let me know when the size bug is fixed - and I hope I don't need to submit the bug report for this :)

@SlashDevDsp: As far as I know they are already fixed. At least, I have no issues here with the upcoming KDE 4.2 build.

I stil have the problem - I have selected 'show usage of all processors' before adding it to the panel. I am using latest trunk compiled about 5hrs ago.

Ah, then there must be a bug. Maybe even in the plasmoid itself. I cannot test this 'cause I've only one CPU. Well ok, I can add a quick hack to paint the cpu several times, should work. Let's see.

Just to let you know: The sizing bug should be fixed now :)

Just what I'm looking for.

Except that it doesn't seem to be in the SVN where you said. :( Any chance of getting the URL corrected?

It will soon move to kdeplasma-addons I hope.